Your African Music Playlist for a Night in at Home

Are you looking forward to listening to some live African music or has your favourite African-themed music festival been cancelled again this summer? If it has don’t worry, as this blog will help you to create a festival atmosphere in your living room from the comfort of your own sofa! Dress up in your favourite colourful outfit, prepare an African food feast and add these great musicians to your playlist!

We’ve got lots of fantastic and very talented musicians to share with you. Some artists are better known than others in the music industry and around the world so we have chosen an exciting variety of musical genres to discover! You can listen to these musicians on several online platforms including YouTube, Spotify, iTunes and SoundCloud or watch some of their performances featured below. Listening to African music can help you to feel more relaxed, less anxious, and happier improving your mood.

Tip: WOMAD Festival in the UK also has great playlists on Spotify each year featuring artists from their line-up from around the world. Their latest playlist is called ‘WOMAD 2021 UK Artist Announcement’ and they also have ‘WOMAD Lockdown’ and ‘WOMAD at Home’ playlists that you can get stuck into.

If you’re not able to travel at the moment then playlists such as these will help to transport you to distant and far-reaching places around the world. It’s a great opportunity to discover completely new sounds too!

10 Best African Artists to Add to Your Home Playlist

Discover a diverse range of musicians from across the African continent from Sudan to Senegal and Congo to Kenya that can be added to a playlist at home. From Afro-jazz and soul to Afrobeat and even ‘Bongo Flava’ from East Africa – there is a huge variety of different sounds as the African continent is made up of many countries each with their own unique culture and traditional instruments.

Amira Kheir is famously known as the ‘diva of the Sudanese desert’. She was born in Italy but lives in London and performs in Arabic, Italian and English. Amira’s music uniquely combines elements of traditional Sudanese rhythms with desert blues, Arabic rock, Afro-jazz and soul.

We were very fortunate to have the pleasure of meeting Amira in our very early days during our first event in London at Old Spitalfields market in 2015. Amira kindly visited our stall and purchased one of our colourful African print dresses. The style and colours really suited her and the dress fit beautifully. We were so honoured that Amira decided to wear her Kitenge African print dress on stage at the Mint Street Music Festival in London a year later. Amira recently told us that the dress is still one of her favourites all these years later as the cut is so nice! A similar dress can be found in our sale. 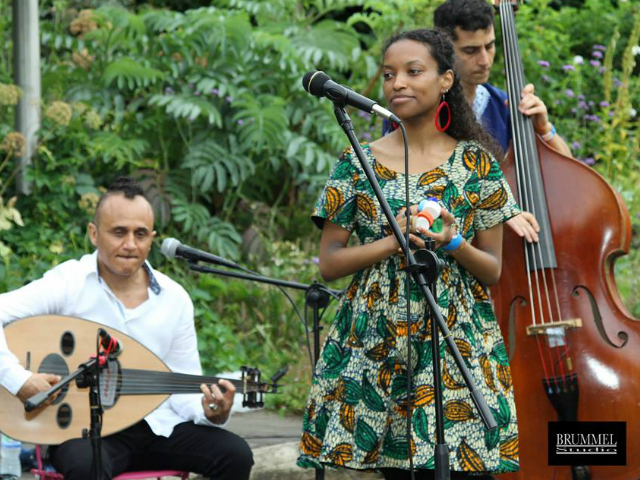 In 2017, we were delighted to listen to Amira perform live at Africa on The Square in Trafalgar Square, London. Her mesmerising vocals echoed soulfully around the square and gave us all goosebumps as well as an insight into her Sudanese roots. It was a lovely surprise to bump into Amira again at Africa Fashion Week in London in 2018 and find out about the exciting launch of her third album Mystic Dance featuring the songs ‘Amwaj (Waves)‘ and ‘Manaok (Forbidden)‘ that could be added to your playlist. Watch behind-the-scenes footage of Amira recording her new album in London!

Sauti Sol is one of our favourite East African Afro-pop bands that were formed in Nairobi, Kenya. The group’s sound blends their soulful voices and harmonies with guitar riffs and drum rhythms. They were the first Kenyan musicians to complete a professional national tour and their success led to further tours in the US and Europe. The band performed in front of US President Barack Obama during one of his visits to Kenya and danced with him. President Barack Obama believes that their popular track ‘Sura Yako’ (one of our personal favourites) has influenced American pop culture.

The band has released three albums, the latest called ‘Afrikan Sauce’ in 2019. They have produced many great songs that can be added to your playlist at home including: ‘Kuliko Jana’, ‘Melanin’, ‘Short N Sweet’ and ‘Afrikan Star’.

Damini Ebunoluwa Ogulu, known by his stage name ‘Burna Boy‘, was born in 1991 in Port Harcourt, Nigeria. Burna Boy’s music is a mixture of Afro-fusion, which blends Afrobeat, reggae, dancehall, American rap and R&B. In 2019, his fourth album ‘African Giant’ became popular around the world and won several awards including a Grammy for Best World Music Album. His album features several different languages including Yoruba and Jamaican patois. Some of his hits include ‘On The Low’ and ‘Anybody’. He has also featured on the songs ‘Location‘ by British musician Dave and ‘Own It’ by Stormzy featuring Ed Sheeran, which could also be included in your playlist at home.

Salif Keita, known as the ‘Golden Voice of Africa’ is a soulful Afro-pop singer from Mali. He is a well-loved musician on the African continent. As an albino, he was culturally rejected by his community and cast out by his family when he was a child but this did not prevent him from finding success in the music industry. Keita’s sound combines West African traditional music with jazz, funk and pop featuring musical instruments including balafons, djembe drums, guitars, koras and saxophones.

The album ‘La Différence’ was dedicated to the albino community and the struggles they face in their communities. In 2018, he announced his retirement from recording. Some of his greatest hits include ‘Yamore’, ‘Madan’, ‘Africa’ and ‘Kalabancoro’, which are great additions to your African playlist.

Nana Richard Abiona, known by his stage name Fuse ODG, was born in 1988 and is a Ghanaian/British musician. His professional name comes from his fusing of different musical genres and ‘ODG’ stands for ‘off da ground’. Fuse ODG is passionate about presenting a positive image of Africa and Africans around the world, which led to his album, titled TINA which stands for ‘This is New Africa’. TINA is also a movement, created by Fuse ODG, that encourages Africans to rebuild their communities using their own skills and take pride in their cultural heritage.

He has had many hit singles including: ‘Antenna‘, ‘Azonto’, ‘Million Pound Girl (Badder Than Bad)’, ‘Dangerous Love’ featuring Sean Paul and ‘Boa Me’ featuring Ed Sheeran and Mugeez (sung in Ghanaian dialect Twi). These are all great tunes to add to your summer feel-good playlist.

We had to share one of the best-known and well-loved musicians from Tanzania, where our modern African print clothing is handmade. Naseeb Abdul Juma, known by his stage name ‘Diamond’ is famous for his ‘Bongo Flava’ hit dance floor-fillers. Add these top Diamond hits to your African playlist: ‘Number One’ featuring DaVido, ‘Nana‘ featuring Flavour, ‘Jibebe‘ featuring Lava Lava and Mboso, ‘African Beauty’ featuring Omarion and the more recent ‘Baba Lao’, which you will hear being played all over Tanzania.

His music, which often includes collaborations with other artists, combines Afrobeat with elements of R&B, reggae, dancehall, hip-hop and traditional African taarab, a musical genre popular in Tanzania and Kenya. Taarab is an Arabic word that means ‘having joy with music’.

Baaba Maal was born in Podor, Senegal in 1953 and is a well-loved spiritual pop singer around the world. He plays the acoustic guitar as well as percussion and his distinct sound fuses traditional African music with pop and reggae. Maal usually sings in Pulaar, the language of the semi-nomadic Fulani people who live in the river valley region of Senegal.

He was meant to become a fisherman, like his father, and was encouraged by his parents to become a lawyer but fell in love with music, which he went on to study at universities in Dakar, the capital of Senegal, and Paris in France. He grew up listening to the traditional sounds of his home region in Senegal but also enjoyed listening to R&B and soul, and later discovered jazz and blues as well as electronic music in the UK. Travel has been very important to Maal in discovering and learning about different cultures and musical genres.

His latest and 11th studio album ‘The Traveller’ including popular tracks ‘Fulani Rock’ and ‘Gilli Men’ was released in 2016 followed by a tour in the UK. As well as touring with Mumford & Sons in South Africa in 2015, they later released a song together called ‘There will be time’.

The band was formed in 2011 in London and is popular with fans of both African and electronic music. Their last album ‘Kolaba‘ was released in 2015 and includes popular songs ‘Kudaushe‘, ‘Panemadzimai‘ and ‘Way Out‘. Why not add these songs to your playlist if you fancy an energetic dance rave in your living room?

Kasai Masai is a Congolese band based in the UK. Their soukous style is fused with rumba and Congolese folkloric traditions. A mix of traditional African music sounds with an urban and contemporary feel, which is very easy and fun to dance to. Their urban equatorial funk lyrics are written in Swahili, Linghala and Kimongo, which symbolises the cultural diversity of DR Congo where there are hundreds of languages still spoken today. Their latest album ‘Sunshine Music‘ was released in 2018 and features tracks ‘Fatou‘ and ‘Se Ke Bien‘. If the weather is lovely, you could listen to their upbeat music while relaxing in the garden if you’re fortunate to have one.

We first discovered The Sea Slugs in the early days of Kitenge. A mutual friend who had a textile studio next to where they rehearsed in Eastleigh, Hampshire, connected us in 2015 as they were looking to purchase some funky African menswear and women’s African print clothing for their band members. It was a pleasure to watch them perform live a couple of times in Southampton and to see them wearing Kitenge’s brightly coloured and fun clothes on stage, which stood out and complimented their Afrobeat sounds perfectly. We also love the fact that they tackle inequalities in their lyrics. 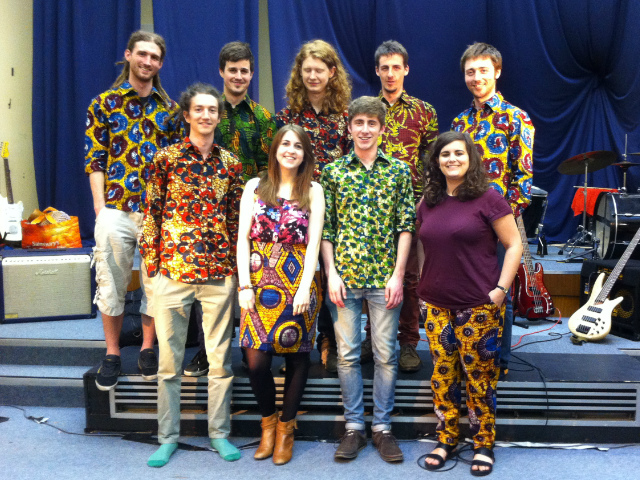 Some of The Sea Slugs wearing Kitenge clothing during a rehearsal

The band is currently on hiatus as they are located across the UK now but still definitely worth listening to if you love Afrobeat music! We love their songs ‘Ignorance of Altruism’, ‘Women They Cause Fear’ and ‘See No Difference’.Watch a video of The Sea Slugs performing live in Southampton, UK on our Facebook page!

Another great AfroBeat band is Afro Cluster from Cardiff, UK. If you get a chance also check out Ghanaian band K.O.G & the Zongo Brigade from Sheffield, UK!

The Sea Slugs – ‘Ignorance of Altruism’

The Sea Slugs – ‘See No Difference’

Dress Up for a Night in with Kitenge

Go all out for your African-inspired night in by wearing a vibrant outfit. Kitenge has the perfect range of unique and colourful ready-to-wear and made-to-measure African print clothing collections for men and women. All Kitenge garments are lovingly handmade by our talented team of tailors in Tanzania using authentic African print fabric. We’ve got lots of stylish men’s made to measure shirts and women’s African print trousers that are extremely comfortable to wear and perfect for a night in a home whilst listening to African music.

If you are looking for more ideas for things to do at home why not read our 20 Fabric Items to Make at Home blog including lampshades, napkins and tablet covers?